I love seeing the First Lady on the cover of ESSENCE magazine’s October 2011 issue, but the cover conceals its best feature story: “Our Teens’ Secret Sex Lives” by Jeannine Amber. It’s my strong opinion that the complex emotions and consequences result from teen sex are not discussed enough–not among parents, in church, and not in mainstream society. I think Amber did an excellent job of covering various points of view in her article, and I’ll highlight a few things here.

Amber’s first statistic cites the National Campaign to Prevent Teen and Unplanned Pregnancy: 1 in 2 Black girls will get pregnant before age 20. She also cites another study from the Centers for Disease Control–the same stats I describe in my book. But what I really like about this article is its call to parents to acknowledge teens sexual curiosity and behavior and talk to them openly and honestly about the facts and pressures they face.

Telling your kids “Don’t do it!” is just not good enough. And neither is ignoring the subject altogether. If a parent does converse with their parents about sex, it’s often a vague conversation (or brief lecture) that doesn’t help their kids understand the facts, teach them how to respect their bodies, assert themselves to make others respect their boundaries, and handle compromising situations. They also need to understand the differences between infatuation, lust, and love–most notably that there are differences! Boys need to see models of males who treat females with dignity and respect, and exude manhood without feeling the pressure to prove their manhood sexually.

It takes courage on both sides to speak up. The article suggests having another trusted adult have “the talk” with your teen if you just cannot bring yourself to be direct and open about sex. If you go this route, pick an adult you trust and who your teen respects and is comfortable with.

Boys and girls both need to understand the serious, life-altering consequences that could result from reckless (or even one-time-only) sexual activity such as pregnancy and diseases–regardless of whether they engage in “regular” sex or the ever-popular oral sex that teens think is safe because they can’t get pregnant. But they’re wrong (see this post where I discuss the increased rate of throat and mouth cancer due to oral sex).

Lots of teens graduate from high school as virgins, but many do not. The implications are devastating both to them emotionally and physically (especially in the case of STIs and STDs), and to the economy. The Alliance for Excellent Education estimates that over the course of his or her lifetime, a single high school dropout costs the nation approximately $260,000 in lost earnings, taxes, and productivity. 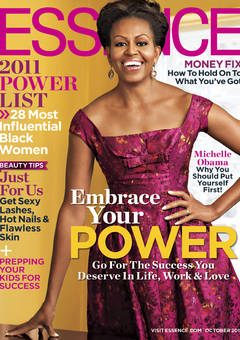 Our sex-saturated culture is constantly lowering the limits–where do we draw the line? How desensitized will we allow ourselves to become before we wake up? We can’t be timid about what’s going on in middle and high schools all over the country–we can’t afford to pretend it’s not happening or do nothing about it. The right time to instill values in kids is from day one, but I don’t think it’s too late to talk to your them about what your values are, how they feel, and give them proper guidance. If you don’t, someone else will, and it may not be pretty. Teens will take their cues from other teens (do you know the behaviors of your kids’ friends?) and popular culture. Do you really want them to act out the things they see in movies and music videos? Some of them already are.

ESSENCE, you almost kept this issue of teen sex and parental communication on the hush by not listing it on the cover. But I’m really glad you featured this article.

Did your parents give you “the talk,” and if so, did it help dissuade you from having sex at an early age? From whatever source you learned about sex, did it adequately prepare you for the aftermath?